Is this the best or worst idea ever?

So… for those of you that have followed my blog you will be familiar with my beloved goat Bob and his tail injury. The short story: Bob is a three legged, two year old goat living on Johns Island that has recently suffered a severe bite to the tail from a stallion mini pony. If it sounds ridiculous, well it is. Yet what started as a simple (albeit untraditional) wound quickly turned into a debacle. As a wound located near the dirtiest place known to all mammals, it has been an insanely ridiculous challenge to help heal the open wound. Although the other people on the farm are worried about the survival of the goats, I am the only one with the resources and desire to help dedicate the time to heal them.
After antibiotics, daily visits, salves from fellow farmers, fencing to separate the horses from the goats, a vet visit, more antibiotics, and the use of tail bandages I thought I was making headway. Then the horses started breaking into the goat pen, the wound became even more infected, and I was burning the candle at both ends trying to deal with the whole issue. After a month of driving out to the island after work, discussions of putting the goat down became a topic of conversation on the farm and I realized that something was going to have to give.
So finally, I decided that the only way I could ensure constant care for my four legged ruminant was to bring it home. With a huge backyard, understanding neighbors, and two gated areas I figured we could pull it off despite living downtown. Technically it can be done legally in our area with signatures from our neighbors, but since we only planned on keep him for a week, we figured we could go with verbal approval until he was better. Dan was onboard, the farmer agreed, and we scooped up Bob for a road trip. With a bale of hay, a bag of feed, tennis balls on his horns for safety, and a bearded friend, Bob was escorted over the river and through the woods to our house downtown.
Bob and Dan bonded on the trip over in such a big way- he followed his every move like a shadow. Dan had built a manger inside our double fenced yard complete with bedding, food, and water. Once in his paddock, it became clear that our generally quiet friend was actually very vocal and was clearly worried about being alone. Every time he lost sight of Dan, he completely fell to pieces, bleating desperately, looking for his truck bed comrade. To help ease the transition, we worked in the yard, hung out near his pen, and hung out with him for a few hours. We pondered on the question: Is this the best idea ever or the worst idea ever? But as he settled in, he started munching on lettuce, hay, and grain. As it started to rain, he curled up for
the evening in his new home and started to drift off.
The next morning I woke up and headed out to the pen to check on our new roommate. When I opened the gate, he was no where to be found. We searched high and low but he was gone. My immediate thought was that he had been stolen because there was no way he could have gotten through two gates. We looked for clues, a note, anything but had no luck. Dan and I walked through our neighborhood, looking into yards and listening for goat cries while I teetered on the edge of hysteria at the thought of him being killed. Without any luck, we decided to call Animal Control to see if a loose goat had been reported. To our surprise, they knew all about it.
In the end, Animal Control had come in the middle of the night, gone through both gates, and taken Bob with out leaving so much as a note or a knock on the door. We ended up at the pound waiting for them to open and once they did, there was no goat. In the end, Bob had been taken to Veterinary Specialty Care in Mt. Pleasant. Thankfully, they were so gracious and loving towards our Bob- they shared our frustration with the situation and the lack of consideration that was given to the animal. So, after all of this, we ended up having to take Bob back to Johns Island.
In the end- I think it ended up falling into the “bad idea” category and I regret ever having put Bob in this position. The silver lining is that Dan and Bob have developed a new found love for each other and I have found a great new emergency vet.
farming, goats
February 28, 2012by Nikki 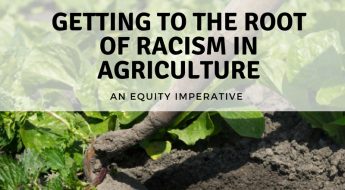 Getting to the Root of Racism in Agriculture: An Equity Imperative

Cultivating a hopeful future in prison.