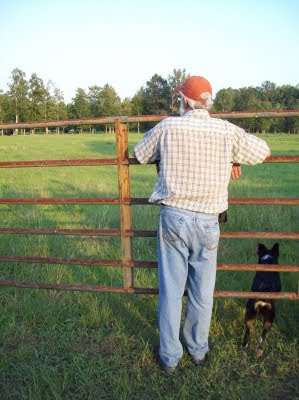 Yesterday I spent the afternoon and evening hosting a Growers Group at a small local farm; I was able to see their cattle operation, their processing facility, and meet a number of other local livestock and meat producers. Although I am vegetarian and do not believe in slaughtering animals for food, I also believe in supporting small family farms and helping those farmers striving to provide animals with a healthier life and more humane slaughtering (I have a hard time typing those two words side by side- but that is a whole other blog post.)

All of the farmers that I met were such genuinely nice down-to-earth people; they work extremely hard for a living, are passionate about their livelihoods, and are more informed about their field of work than any other group I have been involved with. 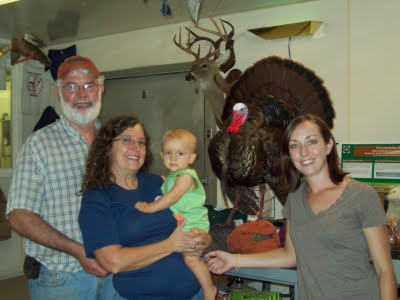 I have a lot to learn about the entire meat production side of farming but the more I talk to people and research, the more complicated I realize the whole process has become. I am amazed that small farmers have even survived through all of the red tape, regulation, and corporate subsidizing. Thankfully, it seems as though the tides are turning towards a greater awareness of the importance of our small local farms, the need to re-build the local food economy, and the consequences of corporate farming. I think this little video below does a great job of creating a visual, despite the fact that it is actually a commercial. http://www.youtube.com/watch?v=aMfSGt6rHos&feature=player_embedded

Thanks to Miss Irene, many Charlestonians are gearing up for what could be one of their first Category 3 hurricanes they may have ever experienced. This is not to say that Charleston does not have hurricanes (although the past few years have been good to us), but rather we have a lot of people that are inland transplants that may have never had the experience first hand.

In my discussion the last day and half, I have been shocked to hear how little people actually know about what to do when there is a chance of a hurricane. It is for this reason that I am writing this post, in the hopes that even if this storm does not hit, perhaps a few people may be more prepared than before.

I list this first because this is something that people often forget until it is too late.

This is a checklist from NOAA. Also consider what you would need to take in case of an evacuation.

— foods for infants or the elderly

— ample supply of food and water

— a carrier or cage

Obviously, you need to make this decision based on what is most appropriate for you and your situation. That being said, here are some things to consider.

Due to sheer exhaustion, I am going to give this a rest and hope that Irene will as well!!

Stay safe and always remember- it is better safe than sorry. So buy everything you could ever need and keep the receipts in case you don’t!! 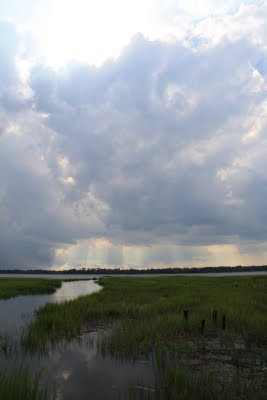 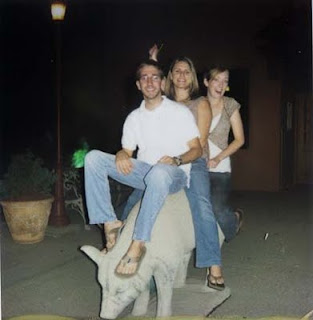 Neal, Jamie, and I riding a pig in Cincinnati, OH

This weekend my friend Jamie from college came to visit from Ohio. We had not seen each other in over two years since her wedding and prior to that maybe once since living in Wilmington, NC. Jamie and I met the end of my freshman year of college at UNCW because she lived in the same apartment complex as one of my best friends. The first impression I had of Jamie was that she was ridiculously proud of being from Ohio (did you know that 8 of our presidents are from OH, it is the birthplace of the wright brothers, and that buckeyes are goodluck?), she loved sports (Go Buckeyes!), and she would say exactly what she was thinking (while laughing the whole time). What I loved about her was that even though we had completely different political views and many differing beliefs, she was always up for and adventure and you could count on her to be there when you needed her.

My sophomore year we ended up all living together in a neighborhood called Yesteroak, which was the beginning of what would be three years of being her roommate and many insane memories. There were a lot of cul-de-sac parties, late nights of playing nintendo, girl fights (sometimes involving nintendo), dance parties, dog chasing, broken hearts, pig-pickins, and growing pains.

When she arrived Friday night it was as though I had just seen her last week. There is something about having lived with someone for several years that creates a level of comfort similar to family. No matter what you have gone through or how long it has been you tend to fall back into your routine without any trouble.

Saturday while I worked the farmers market she went with Dan on the bike ride for Edwin and then biked to Marion square to meet up with me. Before she arrived I had gotten a call that there were some loose chickens in someone’s front yard (my boss told me I could add the title Chicken Wrangler to my resume if I could catch them). So when Jamie found me, we jumped in the truck and went on a chicken hunt. Next thing I know I have caught a hen and cannot find the rest of the flock. I peek over the fence and see the other six hanging out next door. As it turns out, they live at the neighbors house under the porch and are owned by a guy that obviously knows nothing about chickens (including that they fly, need water, and that roosters are illegal downtown). Needless to say, if they get loose again, I may not be returning them.

From there we headed home and then to Sullivan’s Island. We hung out under the cloud covered sky, watching storms roll past, and eventually got chased away by the tide. I realized that I need to spend way more time at the beach, especially in the late afternoon. 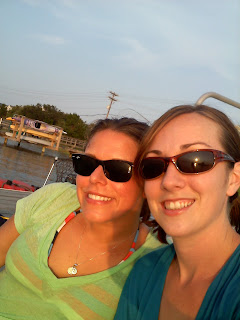 After beaching it, we stopped at a local bar to get a drink, at which point we decided we wanted to find a dock to sit on and enjoy the sunset. With our to-go drinks and Jamee’s fishing pole we headed out onto a small and unblocked private dock. We put our feet in the water, cast out the line, watched the sun melt into the water, and talked about the good ole days. 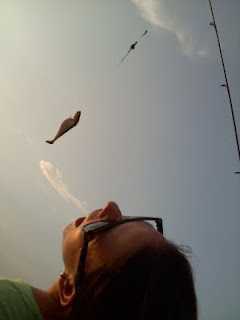 As if the moment could not get any better, dolphins broke the surface and began curiously investigating what our private dock party was all about. This same moment could have easily occurred 6 years ago except that now we talk about our careers, being in committed relationships, and considering a life with children. 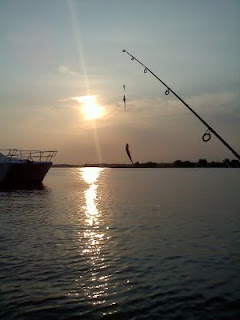 Sunday after brunch we headed into downtown to walk King street, visit the market, explore some of my favorite spots, and visit Dan at work. We took a bike taxi to dinner, dodged the rain-drops, and finally headed home to go to bed. The weekend was nothing incredibly out of the ordinary but it was nice because for a few days I was able to enjoy the comfort of an old friend, share my world with someone that genuinely cared, and laugh until it hurt. 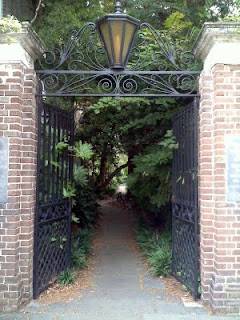 I know that in 6 more years we will look back nostalgically on weekends like this one and envy our freedom and youth… but I have no doubt that we continue to enjoy whatever it is we happen to be doing. 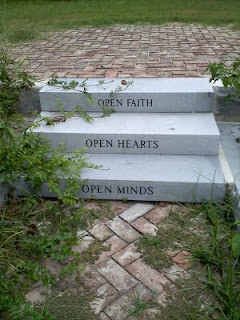