Launching a new business is an overwhelming endeavor, especially when the industry requires making a large investment in real estate and infrastructure. In agriculture, accessing land and infrastructure has become such an incredible challenge for new and beginning farmers across the nation that it is listed as one of the top barriers to for being able to break into the industry.

As a state where agribusiness is the largest industry and there are approximately 5 million acres of farmland, it seems as though this should not be an issue in South Carolina. Yet our state is experiencing the same challenges of aging farmers and loss of farmland documented across the nation. Since 2007, South Carolina has lost 1,326 farms representing more than 43,416 documented acres of farmland. In Charleston County, the number of farms has decreased by 20% in the last four years, resulting in the loss of 12% of the region’s farmland. Even more disturbing, the regional numbers are higher and contrary to the national trends, demonstrating serious concern for our state. You can read more about the local issues in this article from the Charleston City Paper. The loss of South Carolina farmland has been the result of a number of reversible factors – the failure of farm businesses to thrive, absence of planning, the lack of a willing and trained workforce, an aging farmer population, and the absence of a relevant support system and adequate resources.

Often upon retirement, a farmer’s options are limited because they are either unable to continue the farming legacy in their family or they are faced with the reality of needing to sell their farmland to provide for themselves and their families. These farms are often well-established, valuable businesses that demand an experienced farmer with the financial capacity and business acumen to buy-out and operate an existing operation. Unfortunately, this is where a major gap exists across the country. The family farm model has been quietly disintegrating over the last two decades as farm children leave the industry is search of more stable careers and corporate farms or real estate development absorb these operations. New farmers entering the market do not have the capacity to take over larger existing operations and struggle to find the smaller affordable acreage equipped with the necessary infrastructure. Without the support system to facilitate farm transition planning, the results are often devastating for older farming operations and daunting to new ones. Unfortunately, the cries for help from farmers and farming advocates for the need to pro-actively address the aging farming population and loss of farmland were not heard until recent years. As the culture of agriculture began to slowly change, the gap between existing and new farmers began to grow.

In many parts of the country, new and beginning farmer programs and conservation groups began creating programs in the late 90s in an attempt to address these issues and thankfully in 2009 the USDA’s New and Beginning Farmer Rancher program was established, providing much needed financial support for the growth of programs able to make significant impacts across the nation. From 2010 to 2013 Lowcountry Local First was proud to receive funding support for the Growing New Farmers program through a subcontract on a NBFR grant designated for SC New and Beginning Farmers. Programs like these are the first of many necessary to begin rebuilding our local food system.

Currently, prospective farmers entering the small-scale agriculture industry are faced with the overwhelming challenge of trying to launch a fledging business with limited capital and often little or no access to affordable arable land. These new farmers are not yet capable of taking over large established farms but given time and support, could potentially position themselves to transition existing operations into new ownership or management. Considering close to 70 percent of the nation’s farmland is expected to transition in the next two decades now is the time to think creatively about how we can build connections to facilitate this transition and bridge gaps for new farmers.

For Lowcountry Local First, the first step was training the next generation of farmers with an Apprenticeship and Certificate in Sustainable Agriculture. In 2012, we had over 70 graduates of the program (with 25 additional graduates annually) and were prepared to take the next step in lowering barriers for new farmers by launching of the Dirt Works Incubator Farm. As our Dirt Works farmers prepare to transition onto their own properties we have begun to develop a farmland linking support system with support from a number of local organizations. Through the development of our own internal system, we have been able to identify existing agencies, program models, supporting materials and best practices in the area of land leasing and purchasing. 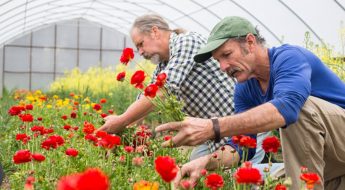 Finding Peace in the Chaos of Farming

« Previous post
Local Farmers Assess Devastation & Ask For Your Help
Next post »
Learning from our neighbors: Sustainable Agriculture in NC