The burden of a car.

After having spent almost two years recovering from my last car ownership experience (nightmare) I had no doubt that the transition back was going to be rough. Obviously, when you are buying a used car, the car has been USED. No big shock there. The hope is that the car has been used gently and there are minimal problems with it. Mechanic or not, there is just no way to predict the future of the vehicle, as much as I wish it was possible.

So, after taking out a loan and paying the upfront cost of purchasing the actual vehicle (which cost more than I had really hoped to spend). I then had to dive straight into insurance, tags, and taxes. A note on the taxes. Why did I have to pay over $200 in sales tax on a used car? Does that make sense to anyone? Note to self… it does not help anyone to claim the actual price paid.

Anyway, these are all expected expenses. So, moving along. As mentioned, I had to buy a battery. Once the battery was purchased, it became clear that I also needed new contacts, so lets throw that in too. Lucky for me, I have mastered the art of “help me I am a female” with “I am not a complete idiot but you are smarter than me”, in order to get my battery installed, old contacts taken off, and new contacts put on (free of charge, obviously).

During this changing of the battery, it becomes apparent that my radiator fluid is looking low. Since I just dropped over $100, I saved that for later. Later arrived the following day when my car started acting funny and I discovered that my radiator fluid was now empty. Dan came to the rescue and we filled it up. Easy enough?

Well… a week later, my car would not start. Alas, I check the radiator fluid and its empty again. Red flag. I immediately fill it back up and call my mechanic aka James Dean of Charleston (his name is Jerry but I swear he is an older Dean). Co-workers and family are forecasting the worst with scary predictions of head gaskets and new engines. After dropping off the Magic Carpet I feel myself panicking from flash backs of my Altima and the thousands of dollars sunk into that piece of evil machinery. With $250 in my bank account, I was really hoping for a simple fix. Jerry calls me at lunch to tell me that I have a crack in my radiator and that I have to replace it. Simultaneous sigh of relief and distress. I literally do not have the money to pay for it. So what do the adults of my generation do in this situation? Charge it!

When I arrive at the shop, Jerry consoles me with kind words and his daughter tries to distract me with funny stories as she swipes my credit card and takes the rest of payment via check. Ugh, being poor is the worst. As I am leaving, I realize that my gas tank is empty. Nice touch. At least I still have money left on my credit card. 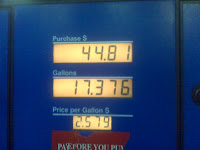 As if the car gods were determined to keep me down, my poor boyfriend cannot get his car to start either. (Am I bad luck?) We give it a jump and it seems to be able to make it to a parts store for a new battery and alternator test, so I follow behind him in my newly fixed truck. Alas, this fix was not in the cards. The truck died in Mt. Pleasant on Hwy 17 and luckily for us, some random guy pops out of his truck (trucks unite!) and pushes Dan into the safe have of a collision repair store (how appropriate). 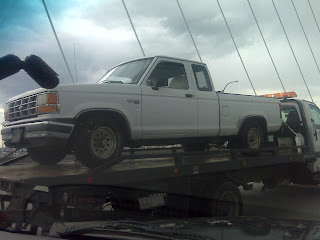 The tow truck arrived in record time and scooped up the little truck for a ride to visit Mr. Popular, Jerry the mechanic.

The Monday after this insane weekend, I stopped into Jerrys to give him the low-down on the truck and when I walked in he asked me if I was collecting broken trucks. 🙂

So here is the comic relief to the whole thing. Read an email I got from Dan below:

Dan: In my call earlier, I neglected to mention the funny slip-up from Jerry who I quote/paraphrase:
Jerry: “My girlfriend told…your girlfriend told me a little about your Ford Ranger over here. Well, she’s my girl too. So when your shifting gears what exactly is the trouble?…”
March 13, 2010by Nikki